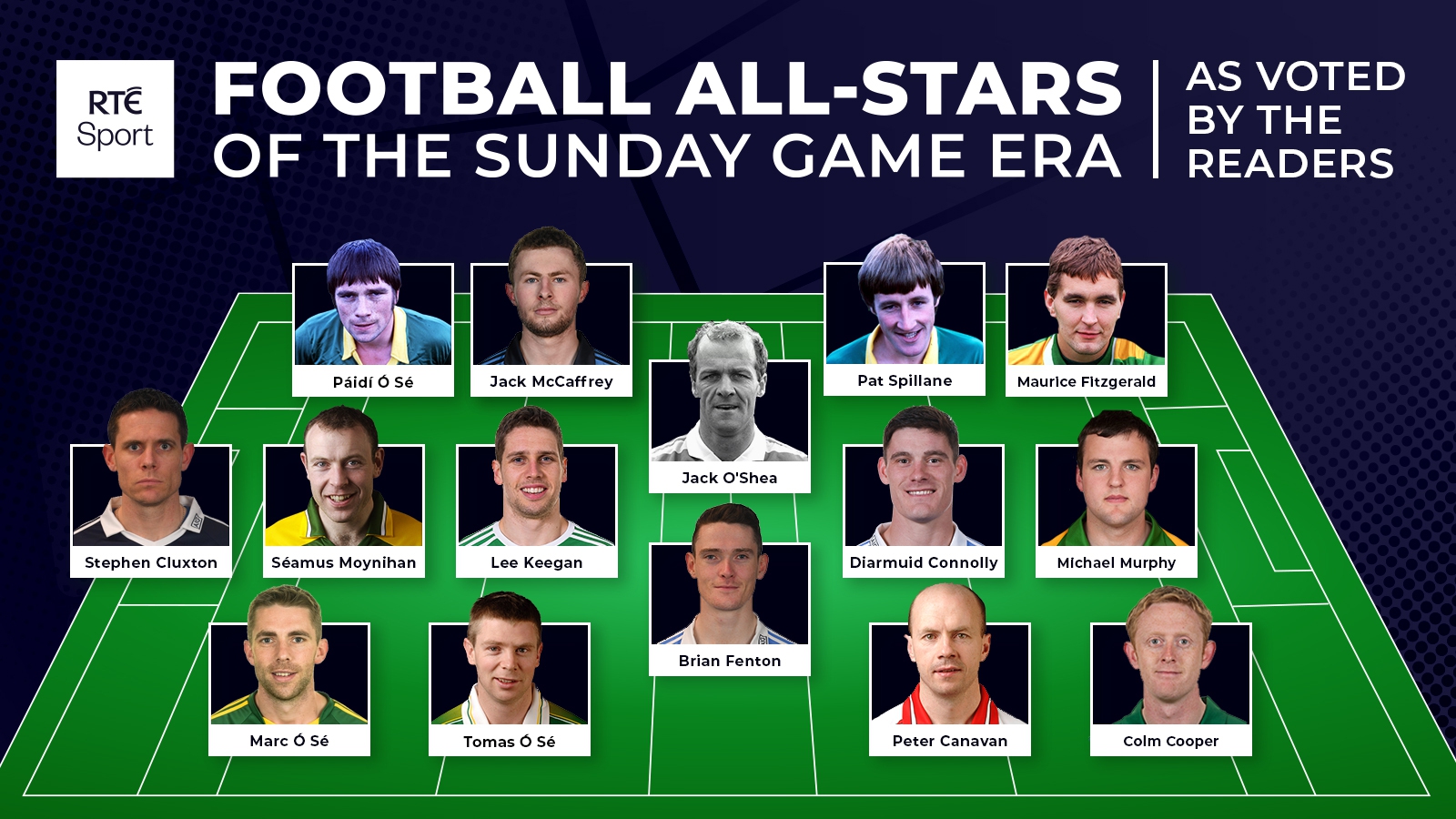 The final XV: Football All-Stars of The Sunday Game era

We reflect on the team that the public voted on.

Is JJ DELANEY in this one?

Public voted for team fair enough. As far as I could see, only scanned the podcasts and stopped, the podcasts were (surprisingly for the GAA media) a Kerry wankfest: Spillane and the Gooch talking about how good they were, and Tomas O’Se telling Paidi stories…feck off

Never would put Michael Murphy near that team

Martin Breheney not showing an ounce of bias!!! had Pauric Joyce as his best in Connacht yesterday. Had only one o Se in top 20, 3 make this team.

I would have Murphy in it, one of the few modern footballers apart from Fenton, McCaffrey and Cluxton who would be a key performer on any team any era to my eyes

There’s a lad from Ballymun, goes by the name of McCarthy, supposed to be decent at football by all accounts.

Looking outside Dublin, how anyone could consider leaving Matt Connor off knows zilch about football. God he was a genius

There is a younger generation that never got to see Matt , only so much reeling in the years can show you , I was blessed to see him play many times , to put it this way up there with D Connoly in the genius stakes

Declan Browne I did not see that often playing for Tipp no surprise ,what I saw I really liked

How is Canavan named in half forward line? Himself and Matt Connor should be in FF line. Marc O’Se was a good footballer but regularly roasted in the games that counted. Seamus Moynihan brilliant wing back but was a stop gap full back and again roasted in big games there.

Matt Connor was the best footballer I ever saw bar none in 53 years watching inter county football.
Leaving him out of any top team or selection is only attention seeking by a selector who wants to be noticed.

Moynihan was the best half back I’ve seen yet. Kerry struggled to replace Barry O’Shea at full back and the pony filled the gap but it was a stopgap solution. To say he was best full back of last 40 years is taking liberties with team selection…

Ballymun Kickhams alone have produced a few fullbacks, each better than Moynihan.

How is Canavan named in half forward line? Himself and Matt Connor should be in FF line. Marc O’Se was a good footballer but regularly roasted in the games that counted. Seamus Moynihan brilliant wing back but was a stop gap full back and again roasted in big games there.

I always thought Mark was the best of the O Se’s … personally and that includes Paidi.

i wouldn’t have Paidi in that team . Jamsie ahead of Tomas too. I would have Moynihan in the team - Rolls Royce player but at centre back.

can’t argue with midfield . Tohill and Mullins next best.

Matt Connor definitely should be there with Canavan in the FF line. Maurice Fitz over Cooper for me too. Alan Brogan should be in the conversation for that forward line too

It’s just opinions I guess…it’s very hard to put together a best of team over a 40 years span. We could probably name 10 top class teams

Keegan over McCarthy is beyond laughable really, fine player and all that Leeroy is.

Keegan has been awful since 2018. His contributions s in the last two summers have been substandard

Agreed. Was very tempted to use was instead of is. And yet there he is at 6.