That club contract doing the rounds

Is that Brigid’s contract doing the rounds actually real? Whose looking after Brigid’s this year?

Never mind is it real, is it really that bad??? The holiday thing is ridiculous yes, but outside of that, surely most of the stuff on it is pretty standard for any adult player/team who are in anyway serious about success?

If it is real or not most of the stuff would be normal in a team “code of conduct” rather than a “contract”. I prefer the junior one myself:slight_smile:

The only problem with it is that it is in writing. Most clubs would be trying to apply those “rules” for the senior teams

As a member of brigids the reason this was done out was for a couple of reasons . This year they are trying something different . They are running top 2 teams 1 and 2 teams together. In this the 2nd team and a lot of minors are new to the commitment that’s required . Our club has struggled for the last number of years and are trying to build up the spirit and comradery again . Outside people don’t know the context of the meaning behind it . It purpose is to reignite the club by commitment being proud to wear ur colours and what’s expected of you to commit to achieving this . Nothing in it is anything out of the ordinary . Commit give something back and enjoy it . Big swing bullshite story

i wouldn’t let the resident muppets on Joe.ie use hyperbole for a few quick easy hits dissuade from the fact that they have absolutely no idea what the inner workings of the team is. Bar the holiday bit which is silly the rest of it is pretty mundane stuff

Someone should ask the muppet show whether a rugby team does the same and would they blow that up on their website?

Fair play this isn’t about winning championships or having prison rules it’s about trying to put the club back as a priority and important and club spirit . Can’t believe the air time this has got .

Bash the Dubs from the ABDs - that’s all it is. Nothing to see here folks except for the many insanely jealous people who rightly have a massive inferiority complex to the chosen Metropolitans. To them it’s a story because it deflects from their own inadequacies …

Hypocrisy is obviously a concept that these guys dont get parkinson et al laud the new club players association who declare one of their goals as “to encourage to players to play significant roles in club coaching AGMs and admin and to promote positive advantage and change”. then on the same day he derides a club for promoting same.its pure anti dub click bate.

There is nothing, bar management agreeing to holidays, in that “contract” that is not expected of senior players across the country, a lot of serious inter teams would expect the same as well.
If a senior footballer can’t abide by the rest of those rules then they will be down with the juniors before too long. Sure there isn’t even a mention of gargle.

Agree its more BS than anything. Silly by management to put it in writing, silly for one of the players to send it to joe.ie or someone outside the camp. Worst is the over reaction of online media etc… as has been said players are following those rules in most set ups. Management agreeing to holidays is ridiculous, but I imagine in most set ups players just wont book holidays that clash with games, and if they do clash they will miss the holiday before missing games. There is no contract stating this but it’s still the done thing.

Not sure why lads are asked to sign ‘contracts’ in a amateur sport.

There is also a screenshot of the reaction from the whatsapp group for the team doing the rounds.

The holiday thing is ridiculous. Only other issue with it would be the line “I agree to play for whichever Brigid’s team I’m asked to line out for”. Could have ineligible players being sent out with the second team coz its in their contract but I’m sure Brigids wouldn’t be at that.

Players shouldn’t leak stuff like that though. Have a bit of respect for the rest of the group

Not sure why lads are asked to sign ‘contracts’ in a amateur sport.

There is also a screenshot of the reaction from the whatsapp group for the team doing the rounds.

Any links t the whatsapp group??

This is exactly the type of response required!! 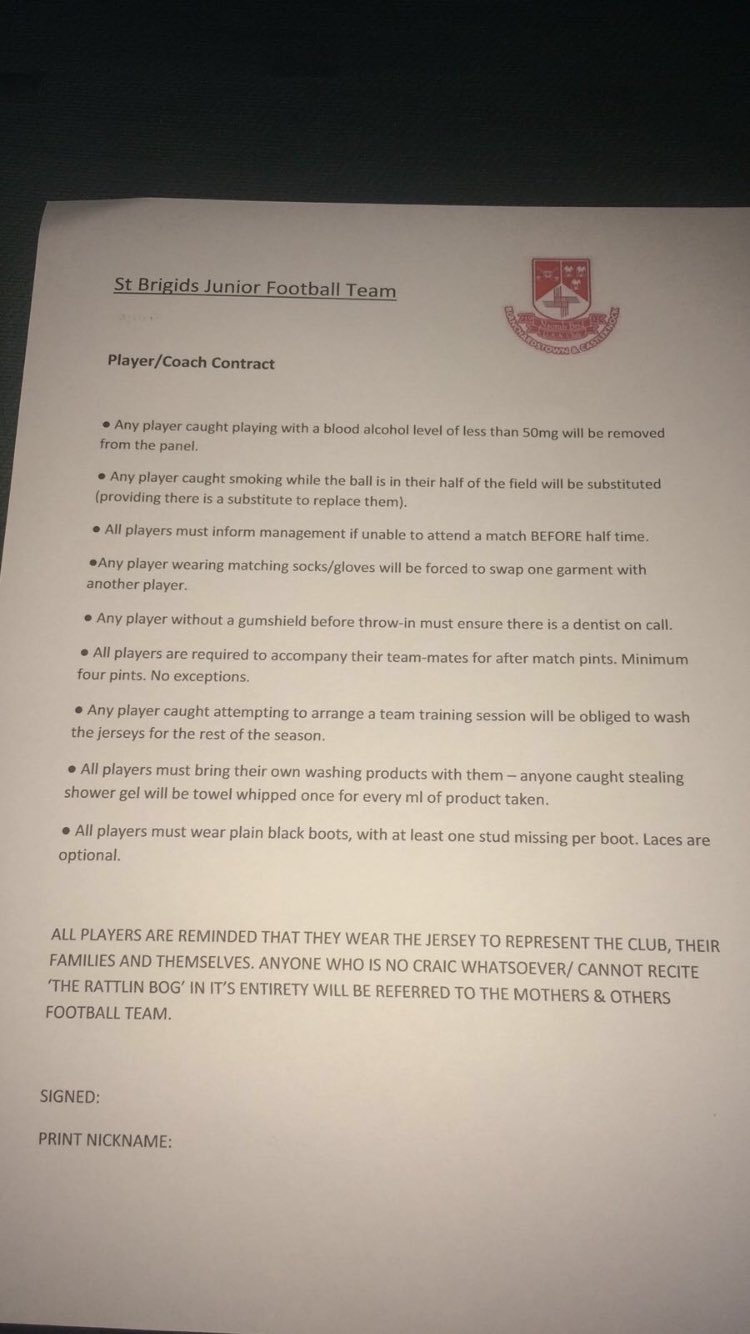 Blurred out the persons… If I was as a Brigits player, I would absolutely not be impressed with the fact that another player is leaking private team information to national media. Very poor form from whoever leaked it, you’d understand leaking it if it was something mental that the team as a collective decided went beyond what was required of them, but that just isn’t the case, it’s pretty much all just the minimum required of a senior player.

it could very easily have been sent to a group of friends and then they sent it on without the person knowing. Doesn’t take much nowadays for something to get out