You do the get the bit about the more cases there are the more likely we’ll have a multiple of that soon enough which could cause us all an awful amount of hardship putting the club games in jeopardy, pubs etc before we even consider the increased deaths. Yeah, 53 cases and 0 deaths is no problem with our population and we need to learn to live with it. It’s a great number in comparison to other countries but if this weeks trend continues it could be 300+ and rising in a couple of weeks time. What daily number of new cases do you have in your head as problematic?

News just said next 7 days key. Been hearing that for weeks.

Anyway, Stanford guy says we’re done as a lot of vulnerable have had it, and many died of course, so this leaves some immunity . Says we’ll ‘be finding coronavirus on people forever’.

Just what he’s saying, don’t come at me. He’s a mathematician. Hope he’s right for all our sakes and his as he’s off on his hollywobs to Portugal and Germany.

Also says mathematically dubs looking at 10-12 in a row.

An increase in cases is not good no matter what way you look at it. Any rise whether that be 5 cases or 50 cases more is not a positive and you can’t dress it up to be. It’s not good but not necessarily time to shit ourselves either.

Yeah, not a time for any pants filling, just to be responsible.

Just what he’s saying, don’t come at me. He’s a mathematician. Hope he’s right for all our sakes and his as he’s off on his hollywobs to Portugal and Germany.

Hope he is right as well, but his earlier predictions seemed to imply that the virus dropped off as a result of not being as infectious rather than because of the measures countries took, might just be clumsy reporting of what he actually said.

For example you only have to look at the states to see what opening up too soon brings. 1,500 dead a day again there, crazy.

Yes. I’m just pointing out the obvious that recent trends are not good no matter what way you dress them up. But I am not shitting myself - but rather living each day as I have don’t throughout all this annoyance. Which means 5 bottles of Birra Moretti 660ml tonight. So it’s not all bad.

Trend is most definitely upwards and we do t have the schools back or pubs open.

For a Mathematician approach he sure makes alot of non-mathematical conclusions, predictions, and hypotheses.

I think the numbers of deaths, cases in intensive care and cases in hospital per se are key. I am unaware of any ‘safe’ number of cases or ‘tipping point’, but given that 1.5 million have downloaded the HSE app, I’m heartened and I think there has been much fear-mongering over relatively small numbers.

For a Mathematician approach he sure makes alot of non-mathematical conclusions, predictions, and hypotheses

Are you saying it all doesn’t add up?

I think there has been much fear-mongering

She was a fearmonger
And sure, t’was no wonder
For so were her mother and father before

Did you read it? It was based on maths actually, I just didn’t reference it.

Agree with all of that but I don’t think you should be dismissive of an upturn in the increased numbers this week. It’s all intrinsically linked. Hopefully it’s just a blip but the concern is that after so many weeks of great numbers this could (hopefully not) well be the start of something that will end up with all of you have listed, a movement back in the phases or a combination of both. I haven’t bought into this “the next few days” are key crap that we’ve been hearing for months now but after the consistent increased numbers this week it’s the first time in a long time that I’m taking a closer look at them hoping it doesn’t kick off.

I think the numbers of deaths, cases in intensive care and cases in hospital per se are key. I am unaware of any ‘safe’ number of cases or ‘tipping point’, but given that 1.5 million have downloaded the HSE app, I’m heartened and I think there has been much fear-mongering over relatively small numbers.

53 wouldn’t worry me on a weekday at all but it’s a bit little high for a Sunday as sunday and monday are usually the lowest days .

I just hope on Tuesday we aren’t going to be over 100- they seem to be teeing up the pubs remaining closed .

30 September we will really know where we are at. Schools back a month at that point and pubs probably open too. People back from holidays to Covid Regions too. If at that point we are under 100 then we have it completely under control. 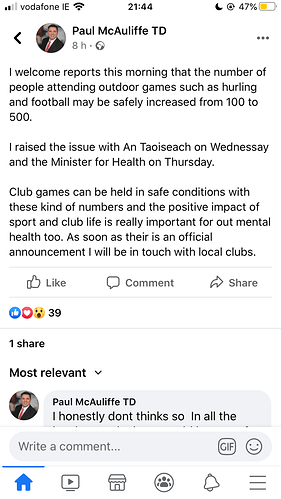 The ex-Lord Mayor thinks only 100 are currently allowed at GAA games but he lobbied for an increase … the usual political opportunism.

Fair play to Paul McAuliffe, displaying such political dexterity to singlehandly get MM and SD to agree to 500 at games. He is truly the greatest TD to represent his people since… eh… Noel Rock.

I think the consistent zero deaths is very important, there is no vaccine for this thing but there is also no doubt that medical people are learning how to deal with it better, heard a doctor on the radio here saying that they are being far more aggressive when it comes to treatment and it is helping, back in March and April there was a lot of caution.