100%, drives me bananas. I always make sure my pockets are completely empty and have all the laptops electronics out without them having to ask, and then you see these thick fooks standing there in disbelief as if its the first time they have ever heard it. OK, maybe it is some of their first time ever travelling by plane, but not the obvious non-Irish people, I mean the ones that are obviously returning after a trip to Ireland, they would have had to go through security getting to Ireland, THEY are the ones that drive me more insane

When I was flying back her a few weeks ago, they took my sachel, man bag, whatever you want to call it to search it. I use this to through and coins, lighters and stuff into, so I have nothing in my pockets. They searched it because I had the small travel deodorant in it, but it wasn’t in a plastic bag. I mean ffs, what difference is the plastic bag going to make if I decide to spray people to death on the flight??

The plastic bag is in case the deodorant accidentally gets discharged in your bag, and the whole airport ends up smelling of Brut or Old Spice, or whatever your preferred aroma is!

Many years ago, I was flying back from Lima in Peru. I checked in my rucksack, but about 15 mins later, my name was called out over the airport tannoy. I had to identify my rucksack, and open it up in front of security, as there was a buzzing noise coming from it! I unzipped the rucksack, to reveal my battery operated razor, which must have been accidently switched on, while the rucksack was being moved. I’m not sure what the security staff thought may have been in my bag!

100%, drives me bananas. I always make sure my pockets are completely empty and have all the laptops electronics out without them having to ask, and then you see these thick fooks standing there in disbelief as if its the first time they have ever heard it.

unrelated to Dublin airport , in 2017 few us went to Fenway for the super 11’s hurling , dubs were down in new York so we hopped down for the day and went to the event in the boozer - despite the free bar at the event , we spent the day on the piss in Manhattan so were wrote off at the end of the evening.

anyways we had to go back to Boston and we made our way in our hungover state to La Guardia airport and as i was first in the queue to navigate the barriers.

As the side effects of the hangover were in full swing - i may have been responsible for some crop dusting whilst walking through the queue - now when i entered the barriers , there was no one around us , but unknown to me , a local man had skiped ahead of the rest of the lads in the queue.

The next thing i know is my mates are laughing , cos while they are not best impressed with me farting , the amercian dude is gagging witht he smell , which has now turned us all into juvenile kids and we have tears in our eyes.

We get to the top of the queue to go through the security scanners , i look up and see loads of old folk and young families to the left , so i choose the queue to the right.

The american lad , who looked lie a seasoned traveller - decided to take the queue to the left and enjoy the fresher air while stuck in a slower moving queue.

What’s your problem, why are you trying to get Joe Duffy sacked?

If you go at 2pm you could be standing in the sheep pens at the top level of the short term car park until about 4pm. They have said if you arrive outside your 2 1/2 hour + 1 hour for bags before your flight you will be waiting there to prevent build up air side. No idea if it is being implemented but tell her it is! 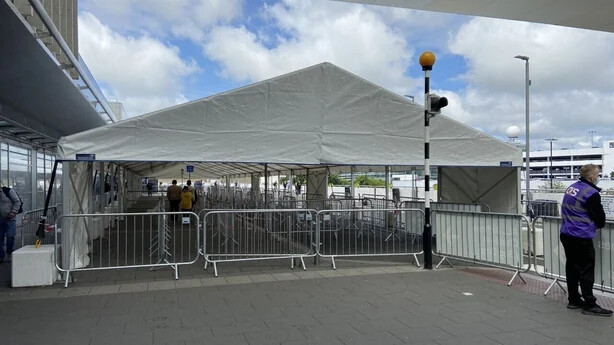 This is what annoys me the most about the whole airport thing, it’s the amount of people directing/doing fook all, if they had them in doing the security, or other real jobs, surely it would move things along quicker. I said it on here before about the short arse standing on his platform telling people to keep moving, go back if you are fast track bla bla bla, little shite
A lad a ringer for Snoop was doing it last time I went through, except he wasn’t roaring and shouting, probably baked

Some emaciated spotty pasty-faced tatooed jungwan with facerings and garishly dyed hair was doing some ‘directing’ when we arrived in Dublin Arpt last week, I swear I had to look twice to realise she was an employee, the way she was going on, shouting unintelligbly with a puss on her whilst strutting along in the opposite direction to what everybody were walking in. It was like something from Rep of Telly

Wow, just wow, imagine someone else on here used such descriptive words referencing a race or ‘community’, you would be the first one on them about how racist they were. Really am shocked by this post
@Iomaint

You talking to me Joe Pecsi? I didn’t reference race or culture anywhere

Travelling back from Sweden, flight delayed in both Luleå and Stockholm, landed in Heathrow and sat on the tarmac for 1hr 10min, never been more delighted a flight to Dublin was delayed😉
Every airport has its issues.