Single code club on alternate weekends? No reason not to play both.

Think they have 3 Dub u20 lads, wouldnt help with numbers and a few playing adult fball with templeogue

I think this sums up the U19 grade so far. 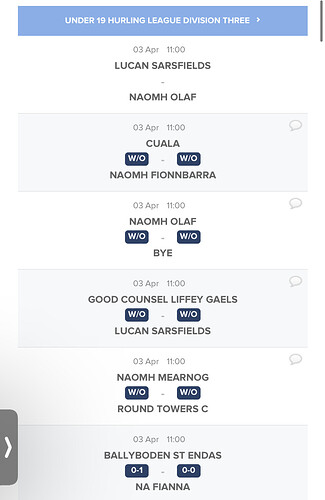 Picture tells a story , my club entered at under 17 , we didn’t enter at under 19 , the lads who would’ve been under 19 most are flourishing in various adult teams , the decision could’ve gone either way but certainly no one regretting it now

How many numbers does you’re club have last year that’s still playing.

Honestly couldn’t give a number but it’s certainly more than you normally get out of minor ,our club gets good crops n bad crops numbers wise coming out of minor ,we’ve often in the blink of an eye had 3/4 players , this year it’s well into double figures
Not much point in making generalisation statements about retainment as there are huge significant factors club to club , safe to say we’re happy were we are at today especially seeing the walk overs in under 19

You can add a w/o to the last game. Na Fianna gave Boden a w/o.

Shocking…but it is what the CCC were warned would happen. Lot of young lads paying membership fees to their clubs and getting little or nothing in return matchwise.

Apparently some teams moved leagues and the county board kept the fixtures also causing some disruption.

Course it will survive

Will this revert back to the old way for next year? Or is this the way the county board is going for the future?

I think they have to plough ahead at this stage to align with other counties.

Most likely U19 will become a specialised competition for the superclubs only and the smaller clubs will just feed into adult teams.

What will the smaller clubs do with their U18 players?
Enter them in U19 competitions or put them in adult teams too?

I would hope not!. A week out from U20 Championship.

More concessions today. Unfortunately U19 really isnt working.
Some clubs seem to be prioritising any/all other grades/codes, and its only gonna get worse as LC and summer approach.