For non-Dublin u-20 matches

We are off and running in 3 provinces now. Mayo got an ugly win over Galway to move into the Connacht semifinals tonight.

Longford dispatched Wexford in Parnell Park to set up a meeting with Meath in Leinster. The other two first round matches are tomorrow. 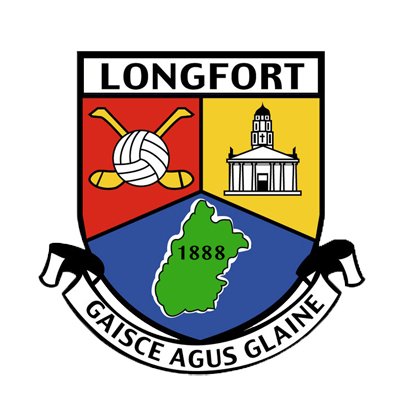 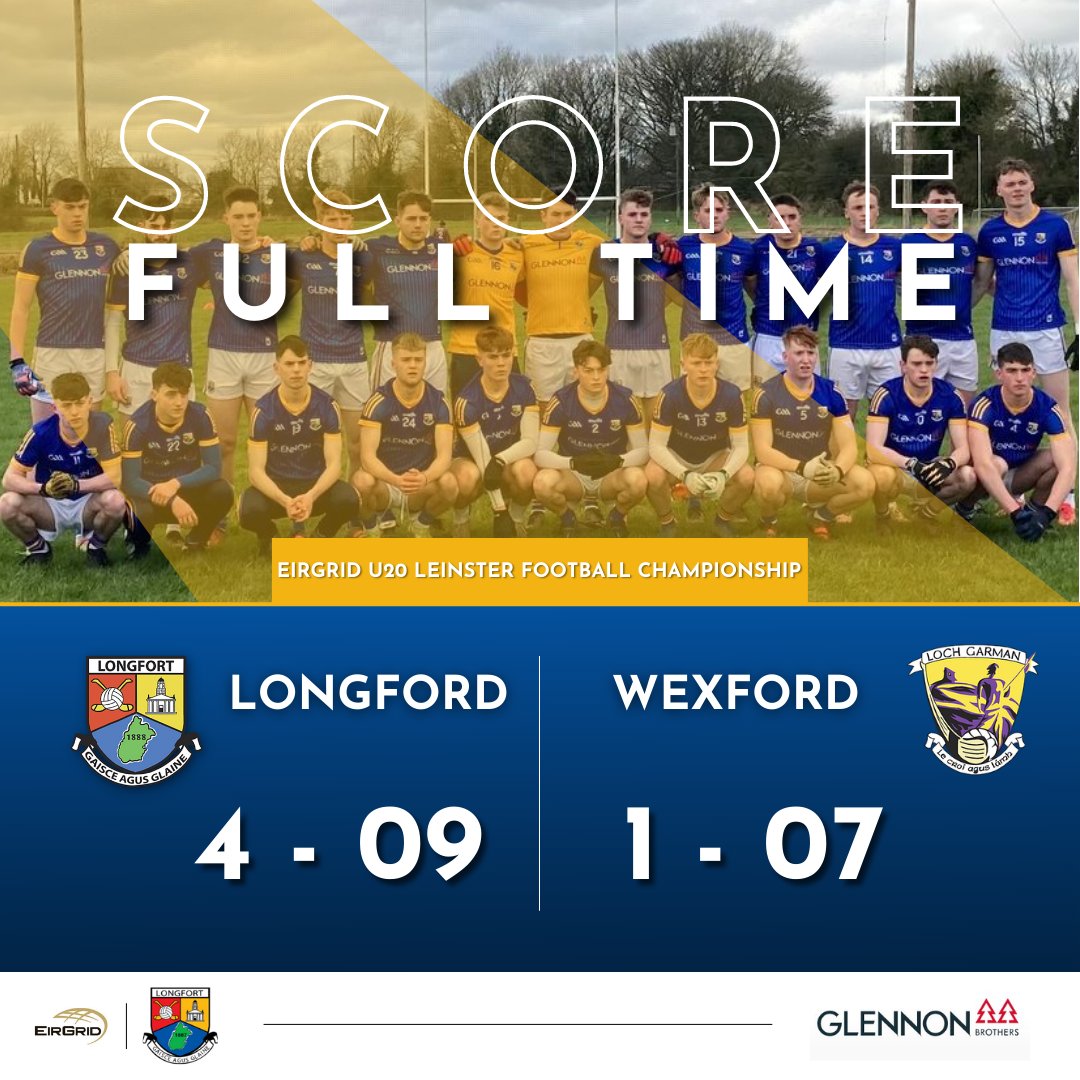 Already down to the semifinal stage in Ulster with Donegal v Tyrone and Cavan v Derry (in neutral venues) on Friday.

@TyroneGAALive
Eirgrid Ulster U20 Championship Semi Final Donegal v Tyrone at Celtic Park on 8th April at 8:00 pm. Online tickets for all Adults and Juveniles must be purchased and downloaded BEFORE going to Celtic Park. There will be no tickets on sale at the venue ulster.gaa.ie/ulsterchampion… https://t.co/OLMnT5R4RH 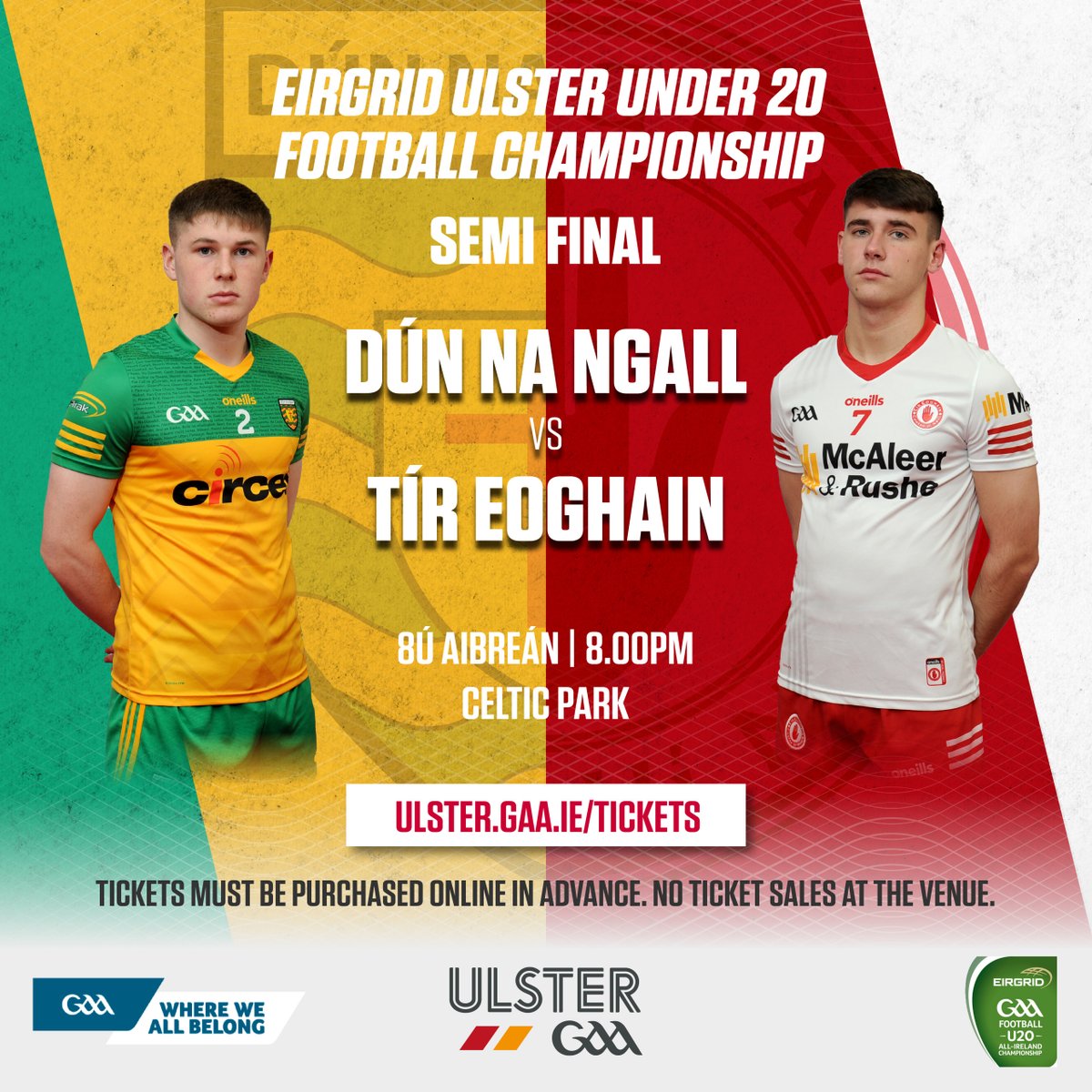 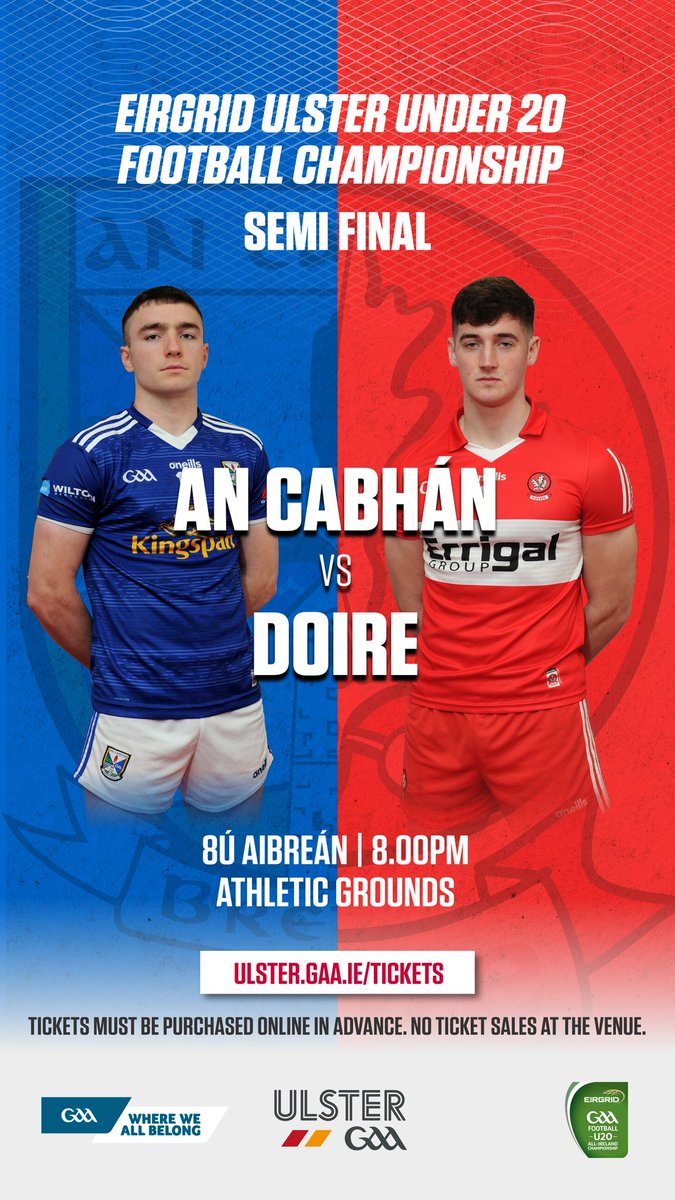 Adding what I can to this…On the Connacht side of things, Mayo vs Sligo final. Sligo beat Roscommon by a pt and Mayo beat Leitrim by the same amount. Sligo a mix of good minor team from the last 2-3 years with some of last year’s minor team that won Connacht for the first time since before the moon landing…They gave Meath a good game in the semi final too. Mayo at one stage were 11pts clear of Leitrim. In a definite case of thinking a game was over, Mayo were nearly caught by a frenzied Leitrim fightback that just fell short. In the Connacht round robin 3 years ago Sligo beat Mayo in the group stage but were sunk by a Mayo goal blitz in the final. Sligo beat them 2 years ago at minor as far as I can remeber. Won’t be much in the the final based on past encounters. Mayo will start as favourites but if Sligo can get Eoghan Smith and Lee Deignan (both starters on the Dcu fresher’s team) on enough ball they can win their 1st ever title at this grade. Game to be played in the air dome.

Think it’s the outdoor pitch not the air dome

Can’t be in the air dome , every game needs to be there or none is the rule I’m pretty sure

Saw Bekan as the venue. They have the outdoor pitch and the airdome. If the rules prevent the dome as suggested below, guessing it will be played on the outdoor pitch. Wednesday night for the final anyway.

They call the other indoor the NUIG dome I think .

Strange to be playing it in Bekan. Didn’t think a provincial centre could be a home venue for Mayo. Surely Ballina was the logical neighbouring venue

The final been in Bekan is a disgrace. John prenty the head of connaght council is a joke. Wouldnt be well liked in any the other counties in connaght and even a few in Mayo wouldn’t either.
Basically a home game for Mayo and they played game other night at venue. Should be a home game for Sligo with alternating rule with last tie in Mayo between them. Bekan has very little shelter for fans and no cover from the weather its not suitable.
On Sligo they beat us by a point we were a joke badly prepared and didnt perform with a decent side. Kicked 18 or 19 bad wides. Id fancy Mayo 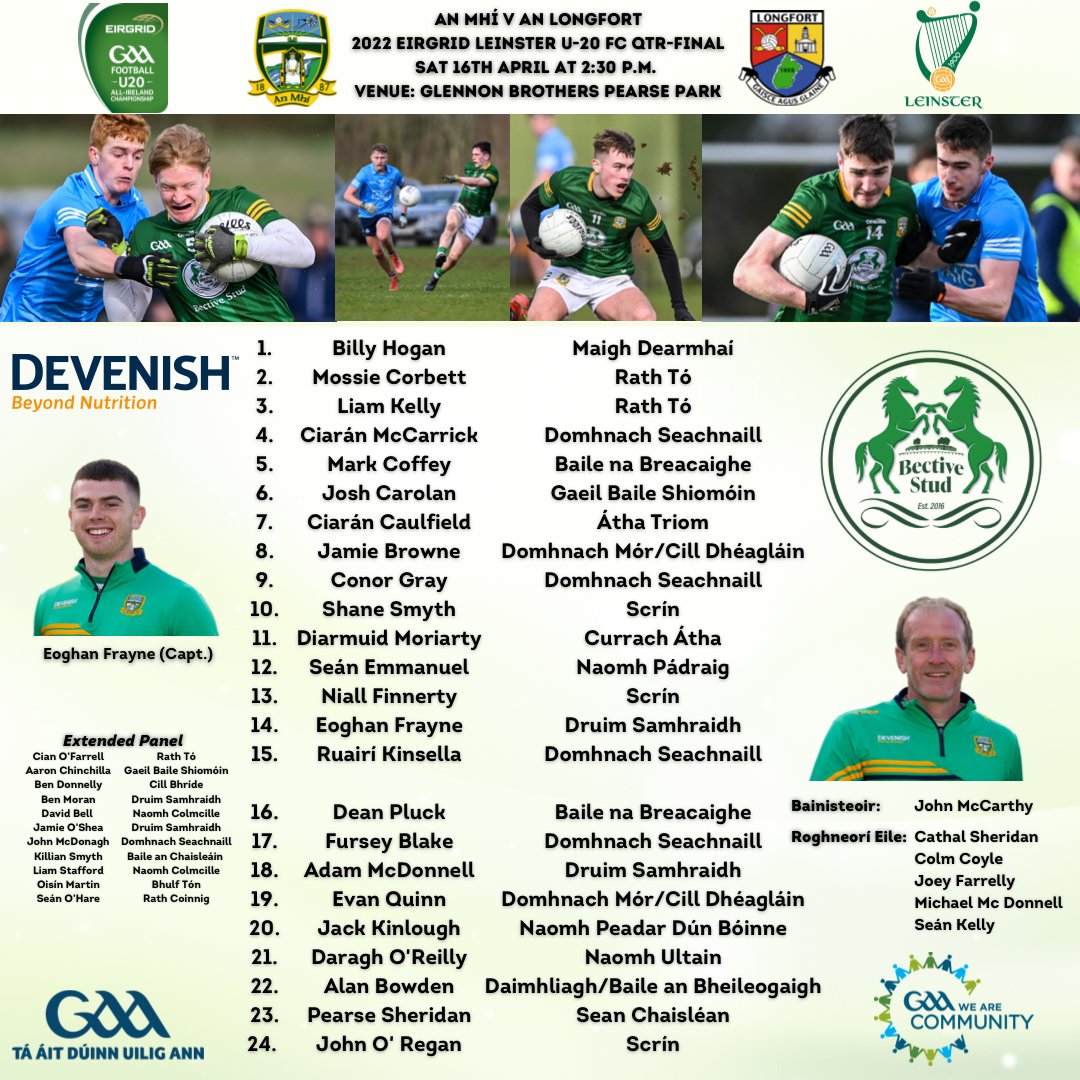 I hope they don’t turn up in Carlow. 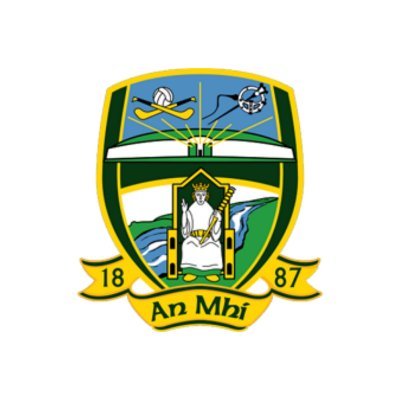 @MeathGAA
Half time in our Eirgrid Leinster U-20 FC quarter final and we hold a narrow lead over Longford. https://t.co/K85bMzaN6h 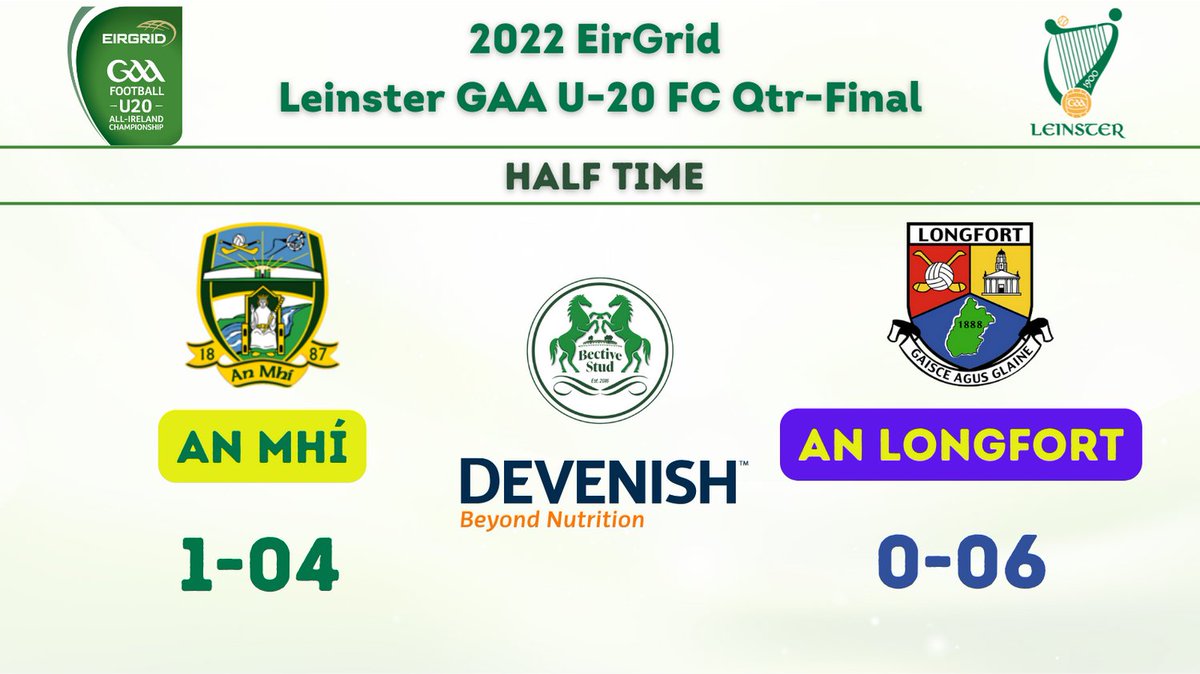 Meath just about get home in the end to set up a pulsating Leinster u-20 semi with Dublin.

@MeathGAA
Full time in Longford and a late Darragh O’Reilly point has secured the victory. https://t.co/oq1Egtr1fX 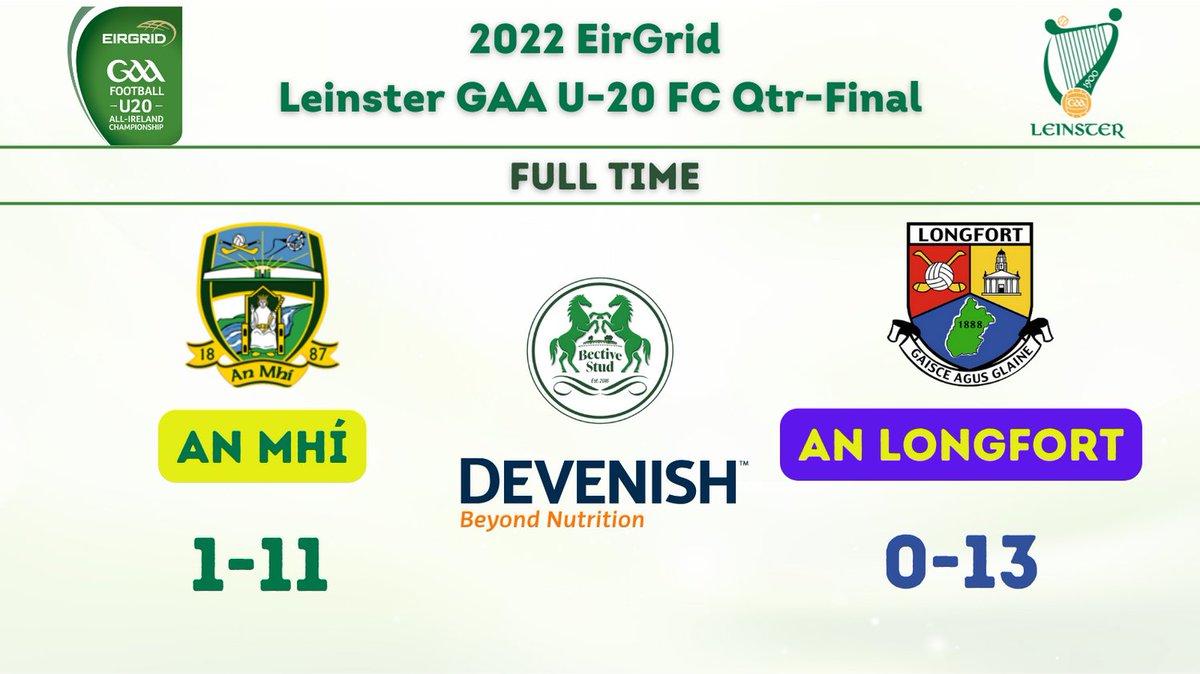 Clare leading 06- 04 vs the guardians HT in Munster championship

Sligo said they wouldn’t go so the connaught gaa blamed tg4 for the whole thing in moving the game to sligo as it should have been and gave a new date.

Who do ye fancy between Offaly and Kildare in the u20s, wonder what Offaly be like this year after winning it last year …convincing win against Carlow but without star man Egan they might find it tough

Sligo beat Mayo by point. Were 5 down with minutes to go. Mayo keeper dodge on last two goals.

First time they’ve won one at either u20 or u21 . Great achievement for these lads

Mayo the better team but in truth you couldn’t begrudge Sligo. Mayo had similar collapses in the last 5-8 mins against Galway and Leitrim but got away with it….we didn’t tonight. Also the style of play Maurice Sheridan has these young lads playing is horrendous…very little kicking and the ball goes back and across more than forward.

Again well done to Sligo on their first win at this grade. Their captain dedicated it to Red Og and his family too which was a nice touch.

Sheridan was managing NUIG and they played similar though the weather was a lot worse in January/Feb.

Problem nowdays players are afraid to make mistakes and lose possession. The Sligo midfielder took a wild shot at the end but thankfully didn’t come back to haunt him.

Paddy Heneghan scored a fortunate goal for Mayo too. I think there is a lesson there in that the Sligo lad kicked it FORWARD. Anything can happen in the dying minutes when you launch it long and direct. Feel for the Mayo keeper though.

Agree that players are afraid to make mistakes. U20 is just one step below senior so you don’t get the freedom of play you see at the younger grades.

The game these days is about retaining possession. Mayo though (a bit like our seniors) ran the ball into traffic and coughed up possession far too easily.

Forwards should be encouraged to go for it but I see them being coached to recycle it back out and around even if it means going back into your own half.