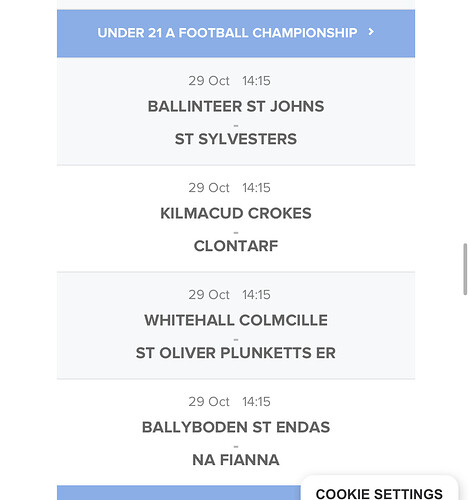 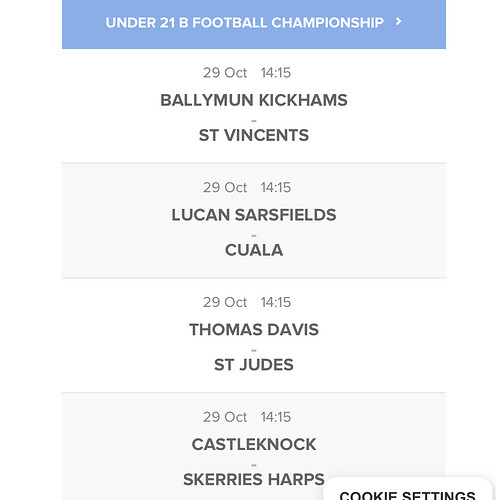 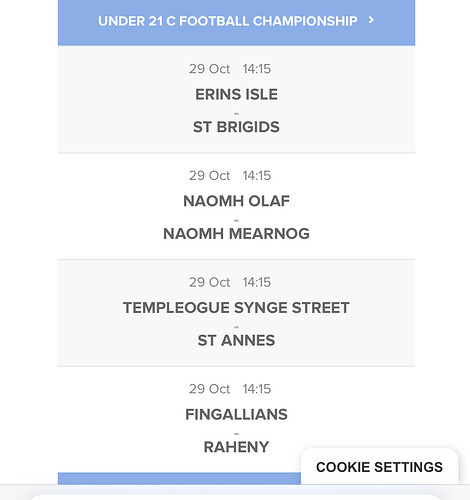 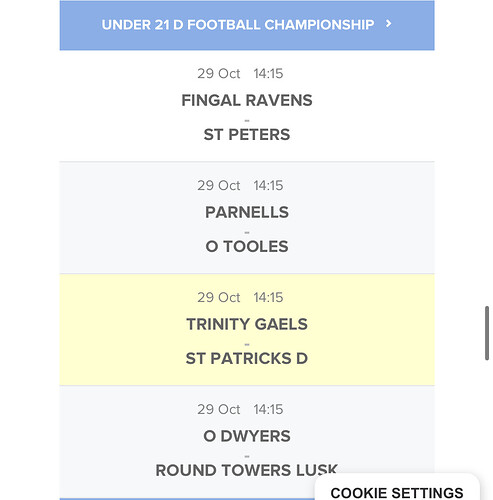 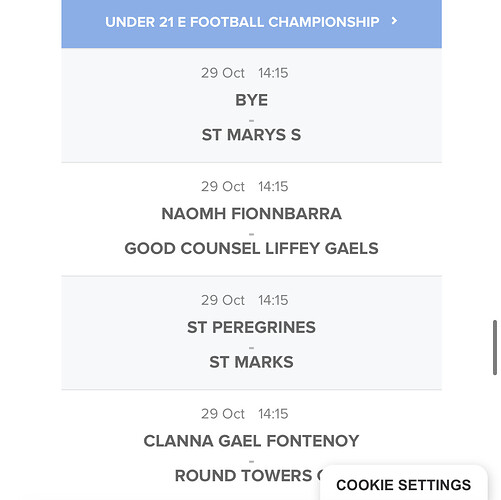 Looks like some strange gradings there, Castleknock won the minor A 2 years ago.

U21 football fixtures released. Mearnog are being shafted because they have to play their relegation playoff on the same day. Hopefully one of the lads is getting married that day so they don’t have to play if they don’t want

No forward thinking to avoid fixture clashes at adult level

What ridiculous grading. Skerries Harps defending champions of the A championship, their team made up of 2 minor A semi finals.
Castleknock made up of an A championship win and a final.
No doubt there will be appeals made about the gradings

TD lost a minor A final followed by a winning minor B last year… it’s a strong B champ.

From experience appeals will be ignored, only way there will be changes is if someone wants to drop down.

Based on a quick look at Minor Championship results 2019 - 2021 (yes I know it’s not an exact science as players may no longer be playing etc) I’d say Na Fianna & Whitehall should be in the ‘B’ rather than the ‘A’.

I am biased but I do think Harps should have be given a crack at the ‘A’ as defending champions, they have played Minor A between 2019-2021 & made two semi finals so it’s not as though they were playing Minor B or C in that period & would be way out of their depth.

U.21 Football on Saturday then U.19’s Hurling on Sunday.

Any team in Grade C or lower looking for a challenge game early next week please DM me.

Aside from Crokes, Boden, NAF, U can normally track the progress and guesstimate clubs trajectory the following few years looking at history in A & B C’Ship from Minor thru U21, not an exact science. For example Skerries, Whitehall have been strong in recent years, reflecting into both now up in SFC A. Likes of Olafs & Raheny not so strong out of Minor and playing U21C tells a tale, although always likely to bring thru 1-2 into Senior. Castleknock, Clontarf, Thomas Davis etc consistently bringing thru Div 1 teams bodes well for them.

Looks like Crokes have withdrawn from the ‘A’ Championship & have been replaced by Skerries.

like Crokes have withdrawn from the ‘A’ Championship & have been

Who are the main contenders for the A&B this year ?

I’ve a funny feeling we’ll see a two in a row by Skerries Harps. A few “cheeky” players on the Dublin panel could really give them the edge. I’d imagine they’re glad to be out of ‘B’ championship.

From an outside point of view, I’d go Ballyboden vs Skerries Harps in the A final.

Balinteer to win A imo

@GAALover I amnot sure they can do it again after the big losses of greg McEneaney and midfielder ethan dunne. If I was a betting man I’d say balinteer or ballyboden for 2022 and skerries with a first round exit