Yep. Oct still wettest but Nov has a few days left to go. Of course it would normally be alot wetter than Sept.

Strong signs of a North and East European blocking anticyclone taking over for a bit now. This sometimes leads to a beast from the east in winter.
So far this isn’t going to happen with the serious cold staying to the north and ultimately well to the East as the main thrust moves southwards rather than west.

Currently it’s not hitting Ukraine but will do eventually increasingly so it appears. So the humanitarian crisis will become worse there and the need for a resolution to the war more & more prominent, if many more lost lives and even worse hardship are to be prevented.
This is not a political thread so I’ll leave it at that, it’s in no way a judgement on the rights and wrongs of all that, just very distressing to know what severe winter weather there now means on the ground for many.

It also means Europe continues to have widespread drought and Ireland lies on the borderline between weather systems, might get a decent dry spell or might get more rain belts stuck over, worst in the south and west

Need a feckn break from the wind and rain.

look at the state of that 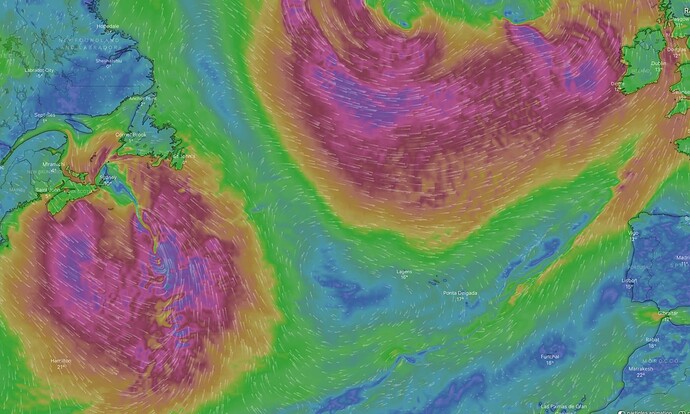 Is that your lungs?

TBH that might look dramatic but it doesn’t mean a whole lot for Ireland right now, it’s just a fairly typical image of the Atlantic in late autumn/early winter. The following shows that most of the rain is gone from Ireland for a few days now:

Some not very heavy showery stuff, worst in the West and south 24 hours later:

Has become part of the great European blocking high after 72 hours, extending a ridge westwards to Ireland:

Still in place at 120 hours, bringing mild, pleasant days, chilly nights inland, fog in places will be slow to clear:

By the limits of the reliable forecast, 144 hours/6 days, the European high is taking over even more, joining a ridge to Greenland & the mid-Atlantic:

In other circumstances this could’ve been a beast from the East but as stated in the previous post, that high has not engaged really cold air over middle Europe yet. So it’s a watered down, average continental airflow coming to Ireland, more chilly than before, but drier also/less humidity, so possibly bringing nice sunny days, frost at night away from the East and south coasts. Small chance it brings dull cold weather to the East and south…

It’s still a very unusual set-up for early winter, one of the very few times it has happened was Dec 1981, which eventually led to The Big Snow in Jan 82…

Here’s some charts at similar times to the above showing where the real cold is etc. Ireland virtually in the middle, orange is warm, green is average to mild, then colder as it goes through the blues from lighter to darker shades, pink is severe cold, and white and grey is stupidly cold:

At 144 Ireland has a chilly East airmass but low humidity and not a strong wind. Not enough cold or instability for snow on the East coast. The Tipp Dubs will be scraping the windscreens though:

The longer-range forecast, 10 days ahead, shows the possibility of a beast set-up becoming established. If this chart were to verify more or less, it would lead to a beast in Ireland by Day 12:

There’s not going to be an exam on all this later, is there?

do i colour in between the red lines?

My best guess overall is that if severe cold is to come to Ireland in the first half of December it may eventually be from the North rather than the East but that’s just based on the longer range charts as above.

41 years since the The Big Snow, where did that time go??

With the price of heating the gaff at the moment, the big snow can eff off till next year thanks.

It’ll be no different next year. Wholesale gas is lower than it was before the war. Price gouging.

Problem is it’s bought six to nine months in advance. Should certainly come down in a few
Months. Happened with petrol.

Is there no Jaysis binary weather left?

Not if it comes from the Atlantic.

Forecast remains for a gradual development of an easterly flow into the UK and Ireland later this week, bringing a slow drop in temperatures. By Sat/Sun that might be enough to produce a few light wintery showers in the East, and some increasing frost inland, but definitely no sign of a beast yet.
It’s also looking more like it’ll be fairly cloudy weather especially in the East with bits of rain at times.

Next week as there does not appear to be any low pressure developing in the Med, as would often happen with this sort of weather pattern, the cold over Northern Europe, initially becoming severe in parts of Scandinavia, will gradually get watered down from the south, and the severe cold over Russia will more or less stay there.
Thus Ukraine will continue to miss the worst of the cold, despite a predominating easterly flow (from Russia). It seems somehow they are being spared a bit.

The blocking anticyclone over North and East Europe will initially join up with one in the Atlantic, and then split, with the Atlantic side drifting north into the Greenland region, intensifying.

If low pressure was over southern-central & West Europe, as it often would be in this sort of scenario, then a severe cold plunge from the North would likely hit Ireland & the UK. But that currently all looks unlikely, with the ‘block’ staying to the northwest, and the other one away to the northeast, with a slack ridge of high pressure in between.

Still leaving Ireland in an averagely cold, fairly slack East flow from that ridge, with a slack system of low pressure to the south and southwest, possibly throwing up some weak rainbelts to the south & East of the country.
Bit of wintry stuff on hills & mtns.